Meet Roger and Shades In Place

In 2004, Shades In Place’s owner Roger Magalhaes had a full-time job as a truck driver. In his spare time he was remodeling his newly acquired home. As rooms were completed, Roger’s friends & family would compliment him on his great craftsmanship & attention to detail.

After his home was complete, he realized he missed the hands-on aspect of construction. This led him to the decision to start a part-time company where he would “just measure and install blinds and shades.”  In June of 2006, Shades In Place was born.

As his “part-time” business progressed, Roger partnered with a local retail chain as a subcontractor to offer his installation services to their clients. Word of his friendly disposition and high level of mechanical abilities rapidly spread among the community and clients began asking him to install drapes, plantation shutter and hang artwork.

In 2007 after only one year in business, Shades In Place was exploding in popularity which gave Roger the opportunity to quit his full-time job and dedicate all of his time to his company. Soon after Shades In Place began offering quality products to his growing clientele, adding to its already well-known and highly sought after installation services.

2009 saw Roger’s business growing by leaps and bounds which “forced” him to move the business out of his house and into a commercial space. With the slow economy, it was easy for Shades In Place to find the perfect “spot” in Franklin, MA, and “The Shades In Place Studio” came to life. Shades In Place is celebrating its 15th year in business in 2020.

Roger Magalhaes was born in San Paulo Brazil. There, he studied robotics in tech school before moving to America in 2000. Roger married his wife Ana in 2012. They love tent camping while on vacation. Some things not many people know about Roger is that he once fell 30 feet from a roof and he has drowned twice. Like a cat, he has nine lives too!

To date, Roger has developed an impeccable reputation for excellence in the industry, and he is regularly recognized by several industry leaders across the country.

Roger joined the WCAA (Window Coverings Association of America) where he gained important insight about industry standards. Additionally, he learned “best business practices” including how to become a better business person and how to better serve his clients. Roger will be the first to tell you that running a business is a continuous learning process which he greatly enjoys.

Roger is a regular columnist for Window Fashion VISION magazine, a presenter at the International Window Coverings Expo and the installation instructor for the Window Fashion Certified Professional FastTRACK program.

In  2014 he created a to the trade group on Facebook called Free Speech Window Covering Pros (currently 800+ members) where dealers, installers and designers from all over the world (US, Canada, UK, and Australia) constantly share information, advice, and suggestions to enhance our practices as business owners and professionals.

Going forward, Roger continues to be committed to always providing the absolute best products & services to his long list of satisfied clients. He welcomes you to join the list!

To date Shades In Place has over 500+ five star reviews from its growing list of very satisfied clients.

Our Clients Are Proud Homeowners

We understand that you’ve worked hard to buy and care for your home, that you are very proud of it, and that you want to live and entertain in an environment that is warm, cozy & welcoming.

Whether you’re looking for curtains, draperies, blinds, shades, plantation shutters or any other kind of custom window treatment, our extensive knowledge and friendly approach will make it easy for you to get exactly what you want.  And, you can rest assured that we’ll get it right the first time!

Our Clients Are Workrooms & Fabricators

To successfully own and operate a business, you have to find the perfect balance between doing what you do best and getting others to help you do the rest in a way that makes sense and pleases your clients.

At Shades In Place, we understand that many of our commercial accounts are small workrooms which are far too busy making beautiful window treatments to worry about installing them.

After all, you only get one chance to put the mounting brackets in the right place the first time!

We are committed to helping you “shine in your customer’s eyes” by providing you impeccable, stress-free measuring and installation services. We serve as the “local branch” for several fabricators across the country that have their representatives selling and bidding on jobs in the Boston area.

Our Clients Are Designers, Architects & Contractors

It goes without saying that Designers, Architects, Contractors and Property Managers are responsible for overseeing hundreds of details for each project they tackle.

When it’s important for you to “get it done right the first time,” Shades In Place, is the perfect solution for making your window treatment story have a stress-free, successful happy ending.

We will measure, supply, install and service all the necessary window coverings on your behalf while you’re busy doing what you do best.

The only task you have is to tell us your vision and we will make it happen from there!

Reviews for Shades In Place Inc.

In January, WF VISION Magazine named Roger a Top Window Fashion Influencer of 2020.  This award is a reflection of Roger’s commitment to sharing his journey through social media and other channels. Roger is the first installer in the industry to receive this recognition. 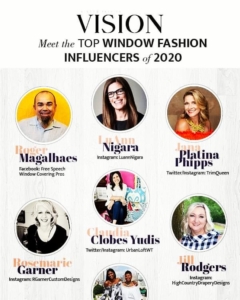 Since I am so active in the industry, I come across some great referrals. While I cannot guarantee the quality of work, product or service they provide, I believe they will meet or exceed your expectation. The only reason my company is successful is because these professionals provide products and services that assist me. These are small business owners with families in our local communities –  just like you and me. These people understand value and hard earned money and they will help you and your business reach new heights with their great knowledge and outstanding products and services. Please consider this an introduction and when contacting them make sure to mention my name. Best of luck!